Another Step Closer To New Roundabout The project will see a major roundabout constructed to improve public safety at a problematic and potentially very dangerous intersection at the entrance to the business centre of Golden Plains Shire’s largest town. There are several busy entry and departure points that meet at this site including Clyde Road (the main entry to Bannockburn from Ballarat); Shelford-Bannockburn Road (the main entry from Geelong and Batesford); the Bannockburn railway line intersection with Kelly Road; and a private access driveway to the Bannockburn Station Café.

Fully funded by the Federal Government, Regional Roads Victoria will build the new roundabout at this site, designed to safely control the five entry and departure roads that meet at the intersection, with the private access driveway to the Bannockburn Station Café to be relocated further to the north. The project also includes concrete splitter islands at each entry to the roundabout and street lighting to VicRoads’ standards.

During the 2019 Federal Election, Senator for Victoria Sarah Henderson made the Federal Government’s $3.2 million funding announcement. Golden Plains Shire Mayor Cr Owen Sharkey joined the Senator this morning at the future site of the roundabout, and welcomed today’s news that the planning for the project is progressing.

In a media release, Senator Henderson said this project would greatly benefit the local community by improving safety at this dangerous intersection through the construction of a roundabout.

“Bannockburn is a growing community and this high-quality infrastructure will provide a platform for the region to continue to thrive into the future,” Senator Henderson said.

“The new entrance to the township will include traffic islands and upgraded street-lighting that will improve safety and security for pedestrians, while allowing for greater access to local businesses like the Bannockburn Station Café.

“This project is part of the Federal Liberal and Nationals Government’s priority to support local jobs, businesses and economies during the COVID-19 pandemic and recovery.

“Injecting much needed infrastructure funds into the Victorian economy and creating jobs for hard-working locals is a top priority as we make our way through the COVID-19 pandemic.”

Mayor Cr Owen Sharkey said the new roundabout has long been a priority project of Council, and welcomed the Federal Government funding of the project.

“The Bannockburn Community Plan identifies the roundabout as one of the most important local issues for the people of this growing town and Council has long been pushing for government investment for this Priority Project.

“With more than 10,000 vehicles travelling through the intersection every day and 10 percent of these heavy vehicles, the current intersection creates major traffic flow issues and is a clear safety hazard.

“Today’s news from Senator Sarah Henderson is another positive step forward for this vital project. Council looks forward to the Victorian Government and Regional Roads Victoria getting construction underway as soon as possible.” 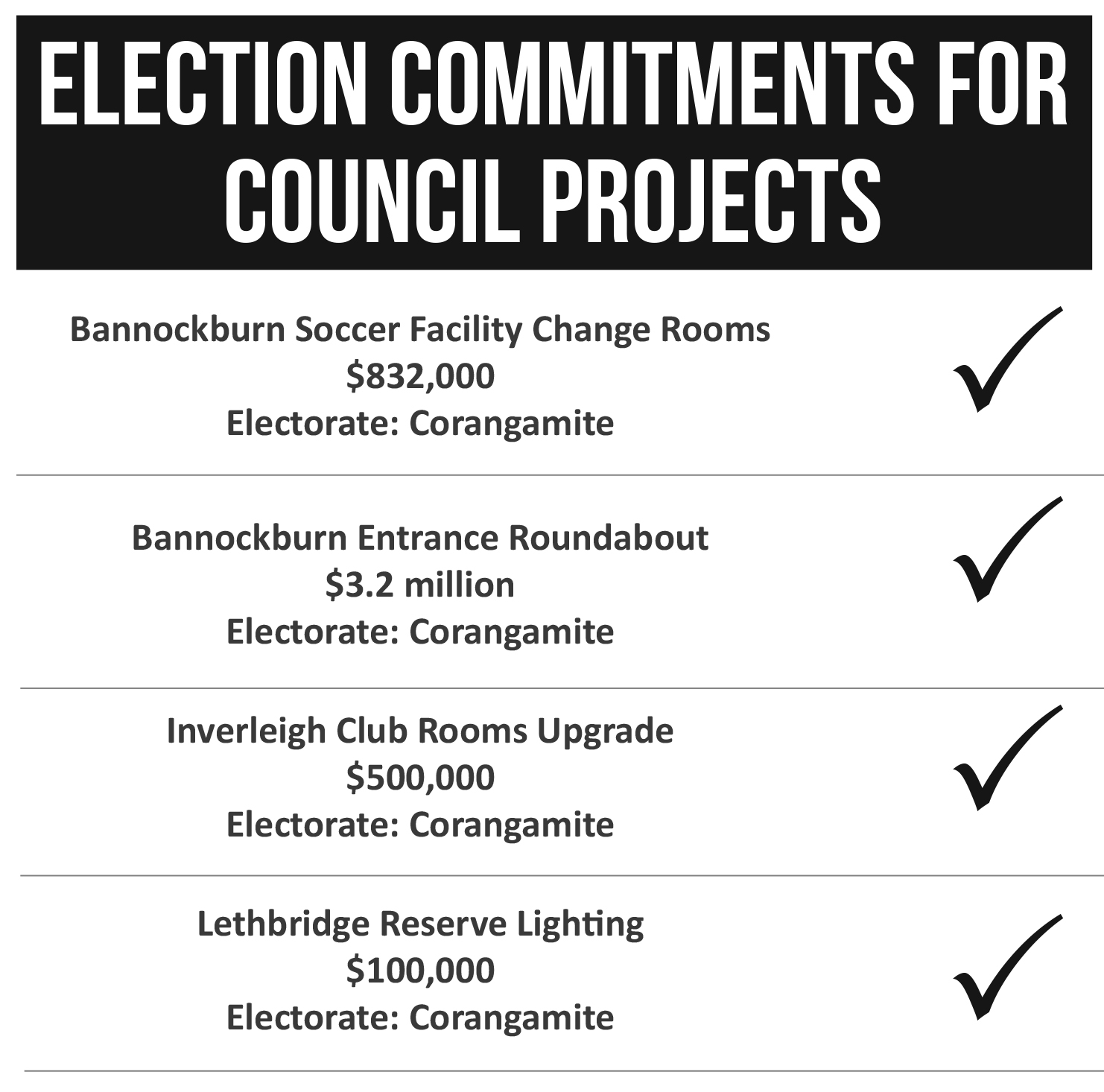 Following a busy Federal Election campaign, the Coalition has been re-elected to form gov